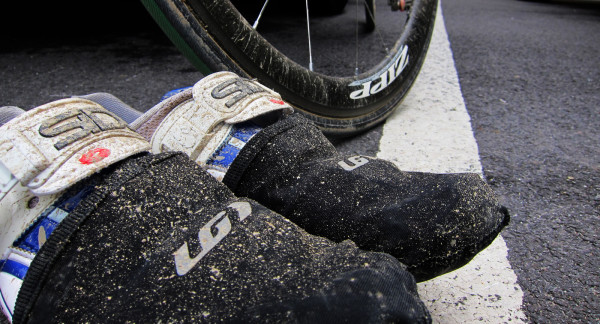 Tour of the Battenkill 2014

I got up to Saratoga Springs around midnight Friday. Straight to bed for my 11 a.m.race start time.

It rained all night. Trying to get warmed up for the start was tough as the roads were still wet and it felt a lot colder than I expected with temps in the upper 30s. Gray, cold, and wet: I guess a proper Battenkill.

I didn’t know what to expect out of the dirt roads. I was feeling confident and strong, after the legs felt crappy on my opener ride Friday, which is usually a good sign.

The race was fairly tame to start, and, once it heated up, I stopped shivering and settled in, generally running in the front 10-15 while staying off the front and not doing any work. The course was different than last year, so I’m told, and we hit a very steep climb (10-15%) about an hour in. It put me in the red zone quick. The front half of the group was not playing around. The field split at the top of the climb, and I was left in no man’s land, behind the lead group of about 25 and in front of everyone else.

I did my best to chase back on and had one or two guys to work with. Then we hit the most absurd climb of the whole day not long after, while I was just off the back of the leaders: easily 18-20%, very soft, chewed-up dirt and sand. As I hit the worst part, I was barely turning over the pedals (Literally cadence was 40). I looked up 100 ft ahead, and the entire field was spread across the road walking their bikes. It was like a scene from Flanders on the Koppenburg when one person screws up and it just becomes this mass bottleneck.

Thanks to my MTB skills (and pride), I managed to crawl my way up without getting off the bike and may have been the only one who did. Unfortunately I was still off the back of the leaders, and the effort to make it up destroyed me. I could not chase at all. It took really the next hour to recover, and then I put in some good efforts on the last few climbs, slowly picking off people as they got dropped from the leaders. But with a 20 mph headwind for nearly the whole race, there was no way I could catch the group with nobody to work with most of the time. I did a lot of damage on the dirt road sections, and would often drop people there only to get caught on the asphalt climbs.

Even though 90% of the dirt sections were in good shape and rolled fast, the parts that were soft were really bad, and you sunk in like quicksand. Very tricky. The Pave tires were excellent though, and I was honestly amazed at the steep dirt section where I could get out of the saddle and still have traction. They were very impressive.

On the last climb, I actually had recovered enough to feel fantastic, and passed almost 10 people (some from my race, some from other heats) and put in a really good effort to the finish line. But it was too late at that point. Ended up finishing 19th. Great experience, real hard-man race, and got me pumped for mountain bike racing this season.

No sweeter finish than under the Battenkill banner.