Then Came the Hurt: The Gripped Racing West Season Begins

It’s the start of a new season, and nothing is more exciting than that.

Wake up! It’s time to race.

The klaxon sounded at precisely 4:30am signaling that the start of Gripped Racing West’s 2013 campaign had begun in earnest. Michael Grosso and I headed South for Round #1 of the mountain bike race series. Michael would tackle the 50-mile endurance race while I would take on the field in the XC contest.

The venue is one we’ve become quite accustomed to over the past few years. Vail Lake Resort in Temecula has become a bellwether for our seasons as it hosts a 3-race 12-hour series along with the opening round of the Kenda Cup. We can almost navigate its undulating ridgelines, switchback descents and steep fireroad grinds with our eyes closed. Mike’s 2nd place finish and my 3rd in the 12-hour last month can attest to this, and the course that was laid before us last weekend was almost identical.

I toed the line amongst some familiar competitors under an atypically warm February sun and set off on the 18-mile course with high spirits. My bunch stayed tight throughout the first couple miles of rolling doubletrack. The ground was covered in a very fine baseball infield dirt over a rock hard deck that kept speeds high leading toward the first steep switchback climb. I was able to keep contact with the leaders as we begun our ascent, picking off lapped 50-mile riders as we climbed. Then came the hurt. 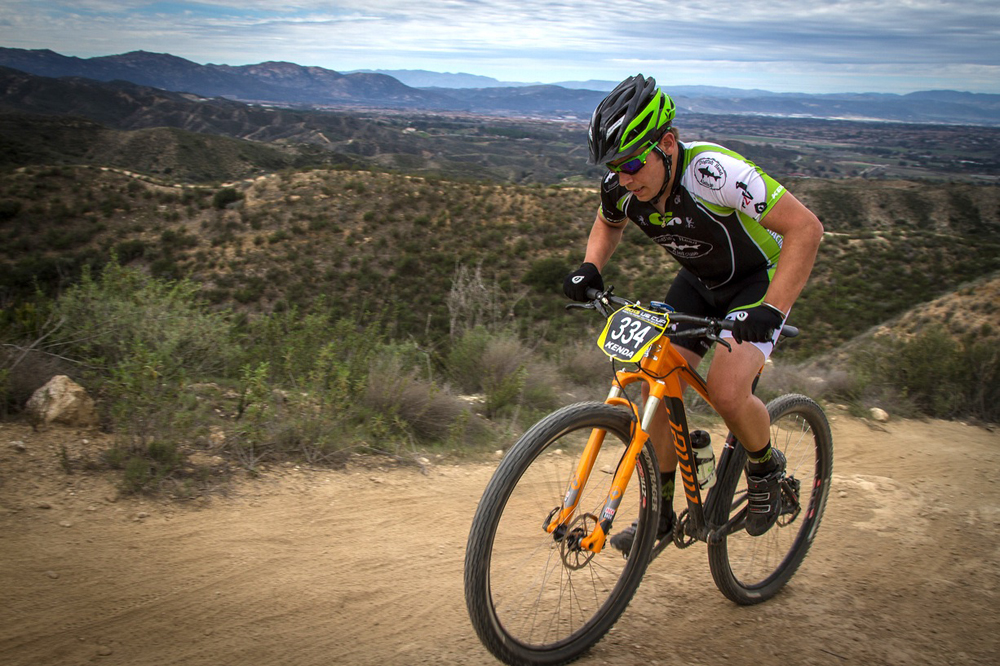 During what I had thought was a very satisfactory performance on this course last month, I was running a very endurance-friendly 32×22 gearing combo. I had thought that gearing up to a 32×20 just before this race would be a good call, but towards the end of this first climb, I realized I made a mistake. I was being steadily cycled back in the pack as we approached the crest, and by the time we reached the first ridgeline run, I was in full-on survival mode.

I came through the start line in 12th and rounded the corner for another lap of hurt. At this time, I realized that I needed to just survive that first climb, use my descending skills and higher gear to make contact, and try to reel in some spots on the back half of the circuit.

The rideglines on the second lap were full out —four-knuckle, brakeless death-grip runs on the rolling ridges punctuated by time trial efforts on the false flat transitions up the canyons. I heard the knobs on my tires sing as they floated over the terrain. 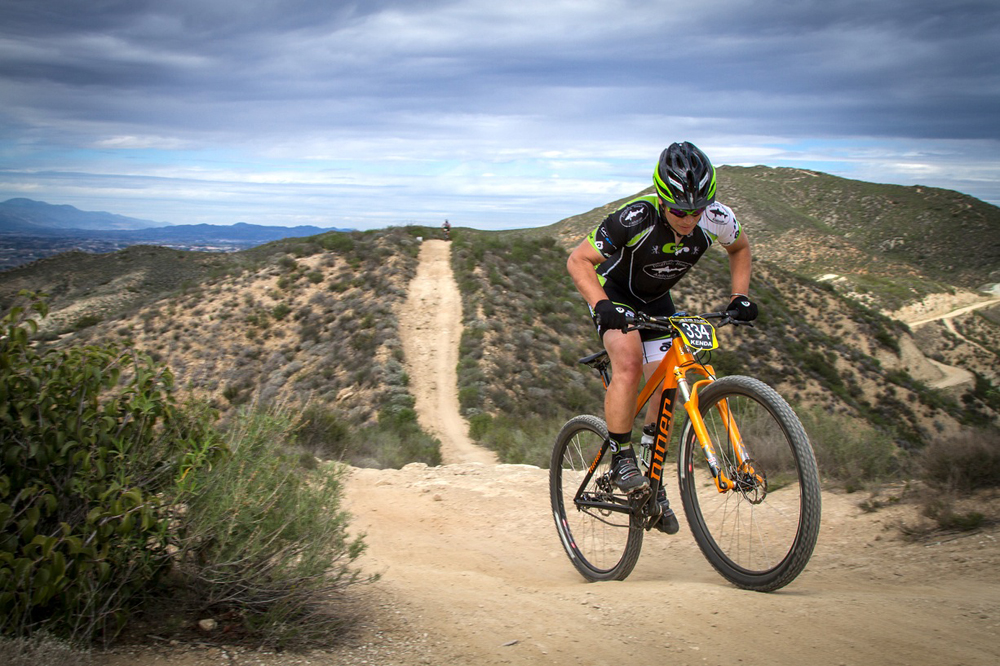 With about four miles left in the last lap, I was able to reel in two riders and put another lapped 50-miler in between us to block. Two miles left, and I afford myself an over-the-shoulder glance to see that I’ve got two singlespeeders breathing down my neck. One makes a move, and I cycle back one spot. I try to hang on to his wheel and realize that he’s been saving an extra couple matches for this moment, and I’m turning myself inside out to keep the wheel. I crack and give up the one last spot that I was able to gain earlier. I decide to hang in and try to take that second rider at the line. 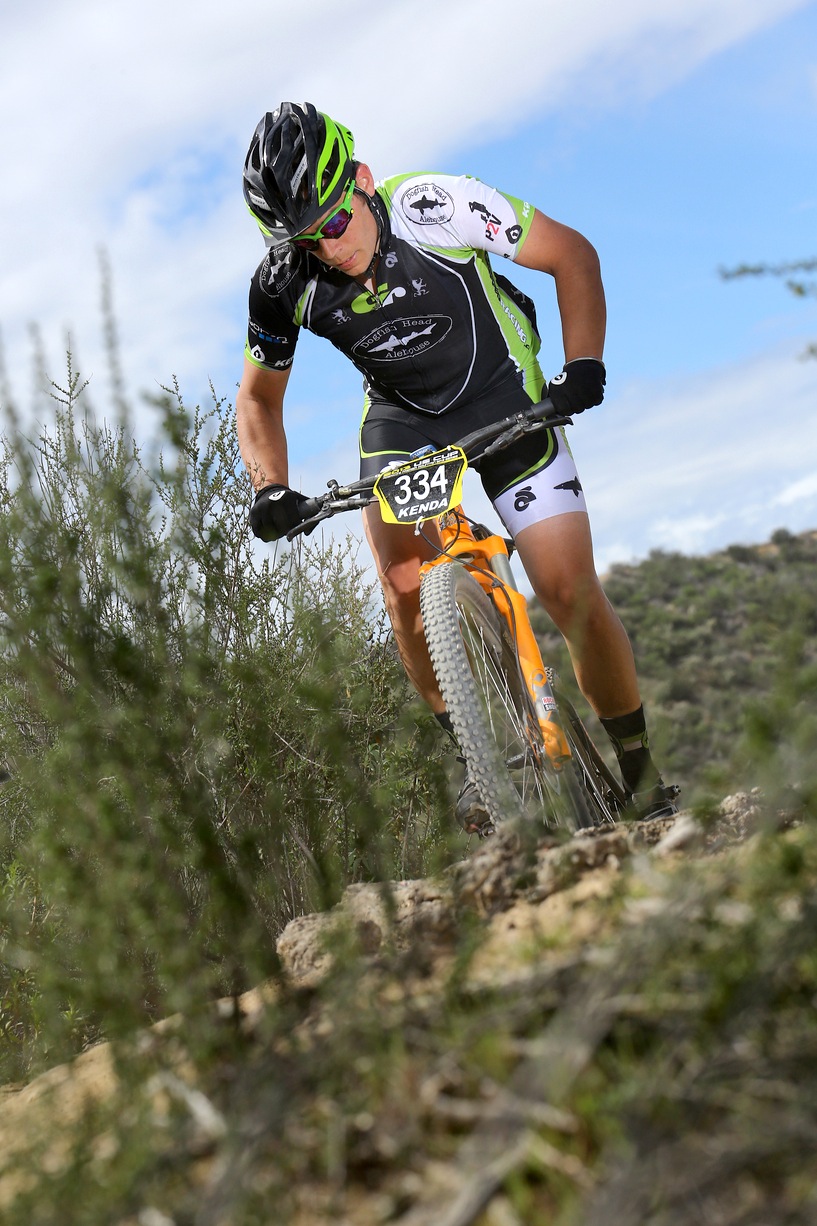 The run in to the finish is set up with a loose and flat series of three turns that descend toward the pit area, and I start taking chances. Two turns in, and I’m right on this guy. On the last turn, I slip my rear wheel on the apex that’s been chewed up to a single loose slot car groove on the outside, give up a gap and finish two seconds behind 11th.

12th is absolutely not where I wanted to be starting the XC season, but that’s the reality now. Last year, I had a similarly disappointing first round performance and was able to bounce back, so that’s what I’m planning to do again. There’s really no choice, and the next round at Bonelli Park in San Dimas, CA has been a favorite of mine for clawing back. One thing is for certain though, I’m wide awake now and making the necessary steps to compete more effectively in Round 2.